Animal Soccer World (Das Unglaubliche Fussballspiel der Tiere) is a German film produced and released by Dingo Pictures. It is a ripoff of Bedknobs and Broomsticks. Like many Dingo Pictures productions, it had many negative reviews, and is regarded as the worst of their output, mostly because of the poor English voice acting.

In a city inhabited by animals, because nothing exciting is happening, the animals start a soccer match. The two teams who shall compete are named "The Wild Dogs" and "The Jungle Kings".

In a village inhabited solely by animals, a young dog named Crummel and his lion friend Yovi complain about how boring their lives are. This issue badly affects the jobs of Harry, a bird reporter; Greta, a duck nurse and Samson, a bear candy-seller. Shortly after, Crummel and Yovi calm down a dog named Yeko and a panther named Jeko, who are fighting over a soccer ball. This gives Crummel the idea of playing a soccer match. So, they all agree than within two weeks, Yeko's "Wild Dogs" will be playing against Jeko's "Jungle Kings".

The event is announced in newspapers delivered by Puss in Boots and a pelican throughout the region. Harry, Greta and Samson are delighted with the idea of a soccer match, as it will be helpful for their jobs. A trio of birds is amused that Harry wants to carry out his job as commentator, since they think he is too incompetent. Annoyed by their skepticism, Harry dares them to be commentators too, in order to find out who is best.

Meanwhile, Yeko begins organizing his team. Crummel is not allowed to play because of his small size, but interestingly, Yovi is allowed to play despite being about Crummel's size. Instead, Yeko orders Crummel to find Butcher, a bulldog, to play as the goalkeeper. The news of a soccer match arrives to the Lion King, who is also Yovi's father, and announces that he will not be playing due to his age. Crummel finally meets Butcher, who is sympathetic with him and agrees to play with Yeko's team only if Crummel plays as well. Yeko finally agrees to let Crummel in his team, but only as a substitute.

When the match is about to begin, some "hooligans" show up. Concerned about a possible conflict, the Lion King orders them to stay in "Area S" and threatens to eat them if they do not do so. One of the hooligans points out that he truly is a dictator to order such a thing. Rooster's band, composed of a dog, a cat and a donkey, lighten up the atmosphere by singing in Dutch. The animals begin playing.

The Jungle Kings are the first to match a goal. After Yeko is badly injured, Crummel takes his place, and manages to kick the ball with such precision that not even the Jungle Kings' goalkeeper, an elephant, could stop it. The match ties to one, and the Lion King announces that there will be another one within six weeks. After quitting to play, Crummel and Yovi are befriended again, despite the fact that at no point did enmity arise between the two in the first place.

Like many of the characters in Dingo Pictures films, the characters are mostly unnamed, and even if they are named, their names are usually drowned out by the English voices.

The movie's logo, used in the original German version 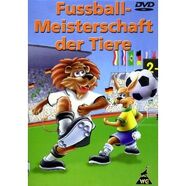 DVD (Sweden)
Add a photo to this gallery

Transcript of the movie

Retrieved from "https://mockbuster.fandom.com/wiki/Animal_Soccer_World?oldid=10762"
Community content is available under CC-BY-SA unless otherwise noted.